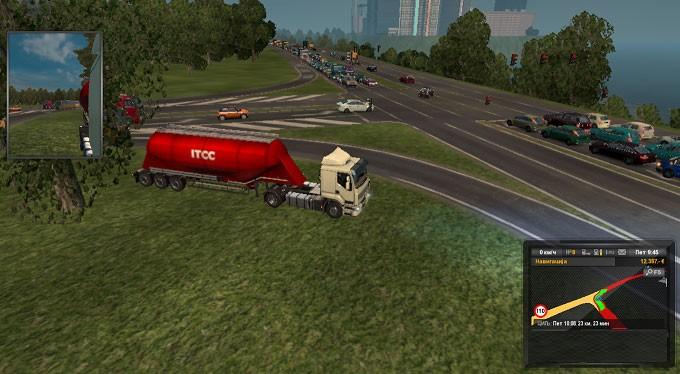 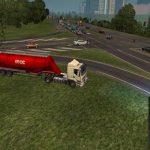 Main goal:
This mod is mostly from players who like high traffic, which cause traffic jams and weighted traffic flow. In order to speed up it, I:
– Chaned work of semaphores, mostly longer green lights, and partially solve problem of left turn (right turn in UK).
– Added semaphores on all crossroads where anyone road/street, on which is enabled ai traffic, intersect road/street which has two lanes in each direction. I didn’t do it on some crossroads in cities, between two crossroads with semaphores or roundabouts. I am sorry about flying traffic light, I still can’t find way to add pole. For me, the most important is that semaphores work.
– Replaced all (only on EAA and PRC) one-lane interchanges with two-lane of same type, except interchanges of two highways, where no one highway starts in near city. On other maps I replaced only one-lane interchange of highways and small roads. Work is in progress.
– Removed barriers from all tolls which haven’t lanes for electronic payment.

Other changes:
Because job generator mostly use ferries and pay 0$ for ferry mileage, and it interfere you from explorirng roads, I remove many ferries, left only neccesery. On example, on EAA map, you can jump from Rio Grande to Vitoria or Santos via Calais, which is unreal. Therefore I removed all ferries from Europe to EAA except Calais – Santos. One more example: You can jump from Kristiansand to Bergen with ferry and it is almost impossible to find jobs with ok sallary via road. I left only 2 ferries, look on image.
I removed Eldorado, Indonesia and Hungary from South Corea because there are new versions of those maps.
I separate Island map from South Corea and moved it to Tyrrhenian sea.
In all map which are connected to Europe via ferry, I deleted all Europe map, so you can drive only on that maps, and made new file with Europe vanilla map for players who still want to play Europe map.
I think that I fixed problems between Promods 2.11 and Russian open spaces, and include fix in Better traffic flow Russian open spaces.

To stay relevant in this competitive market and to constantly engage with the gaming community you have to keep on pumping new more exciting content. Thus we have a new mod updated or uploaded to our site every month. But, fellow gamers should rest easy because although the rate with which we release new content is considered relatively fast, it doesn't mean we are sacrificing quality for quantity. Every BETTER TRAFFIC FLOW ETS2 Mod we have uploaded still to this day are the best in the game. Thus the content we pump out is fresh and worth your investment. Gamers who are looking for new Euro Truck Simulator 2 Mods can expect mods that can enhance the game's graphics and textures. This Euro truck simulator 2 BETTER TRAFFIC FLOW Mod will also be able to color grade the whole game to give it a cinematic look. Other Euro truck simulator 2 Mods being developed include a mod similar to the living city mod. This mod will provide you with extra side missions to complete, a few exclusive skins and outfits, a couple of new high damaging guns, and many more. The mod, when toggled on, can make you immune to all sorts of damage and you will also have an infinite amount of bullets and extreme accuracy to one-shot your enemies. The BETTER TRAFFIC FLOW ETS2 mod will also allow your character to number of things. There are still may other mods some of them are little tweaks like a camera changer while others introduce a whole new story mode into your game.